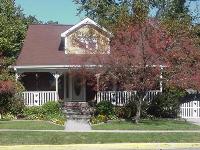 Style Emergence
Shortly after the turn of the century, the Bungalow style emerged. By the 1930s, it had become the dominant style in American domestic architecture. The term "bungalow" comes from India, where it refers to a low house surrounded by galleries or porches. The American bungalow originated in California and spread nationwide, largely through the work of Charles and Henry Greene by way of pattern books and architectural magazines.

Key Features
Responsible for the unprecedented ubiquity of the Bungalow was its suitability to the burgeoning middle class in America's urban and suburban areas; it was inexpensive, fashionable, and generally of modest scale.

Rooted in the arts and crafts movement, which stressed the importance of "honesty" materials and construction, the Bungalow style featured:

County Examples
Examples of Bungalow-style homes can be found throughout Porter County in both rural and urban areas. A typical example is the house shown above, which is located on the southwest side of Valparaiso.