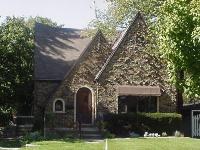 
A variety of other eclectic styles became popular around the turn of the century and, as in the Neoclassical style, the buildings are characterized by the somewhat free application of carefully studied detail. The diverse style of these buildings usually bore apt titles such as Tudor, Mediterranean Eclectic, Italian Renaissance, Pueblo and Mission Revival, etc.


Eclectic types of houses reached a high point of popularity during the 1920s and have
been attributed in part to servicemen who, upon returning from

the first world war, wished
to pattern their homes after the picturesque buildings they had seen in Europe.


Eclectic style was applied to a variety of functions other than in residential buildings. For instance, many early gas stations were built in the English Cottage style, with very steep gable roofs, picturesque chimneys, and facades of stone veneer or simulated half-timber. They were also built in the Mediterranean or Mission style, with stuccoed facades
and tile roofs.


The Tudor style or Tudor Gothic, distinguishable by its Tudor arch, found wide use in early 20th-century religious architecture, and was used so regularly in educational buildings that it is sometimes referred to as Collegiate Gothic. The eclectic style, however, achieved the style's highest expression in the often lavish period houses built before the Great Depression.


A variety of period revival architecture remains in Valparaiso. The Cottage Revival style is represented in the top photo on this page. The photo below shows a local home built in the Tudor Revival style.
Watch City Meetings
Transit
Parks
Voice A Concern
Government Websites by CivicPlus®
[]