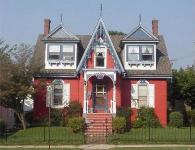 The increased industrialization, evidence of political corruption, and various other anxiety-producing factors of the mid-19th century evoked a yearning for a simpler and purer way of life. This was reflected in all areas of culture - painting, music, and most notably in literature. For instance, the writings of Walter Scott, which portrayed the medieval era in glowing terms, were enormously popular in this country. Architecture also responded to the romantic sentiments of the mid-nineteenth century, and Gothic forms based on models from the 12th-15th centuries were incorporated into building designs.

Gothic Style
The Gothic style is most commonly regarded as ecclesiastical in nature; it is an emotional, upward-soaring style usually associated with the great stone cathedrals of western Europe. American builders, using native materials such as wood and brick (stone was reserved for the most expensive buildings), translated elements of the Gothic style into a purely American expression, which was, at its most charming, in domestic architecture.

Elements of Gothic Style
The most characteristic element of the Gothic style is the pointed arch. Used by medieval builders to span widths and scale heights of ever greater dimensions, the pointed arch in the hands of American builders became a primarily decorative device, faintly echoing its structural origins. Another converted component of the Gothic style is the ornate tracery, which American builders executed in wood with the aid of the newly invented steam-powered scroll saw. This tracery was applied to the eaves at gable ends and appeared in ornate porches.

Steep-pitched gable roofs, often with finials at the apex, expressed the Gothic verticality and caused the Gothic Revival to be dubbed the "pointed style" in the nineteenth century. Eared drip moldings were placed above doors and windows, and some Gothic Revival buildings have medieval parapets, resembling not cathedrals, but medieval fortresses. The preferred facade material was board-and-batten siding, which reinforced the verticality of expression. Brick and clapboard were also used.

Later Gothic Structures
The inherently religious Gothic Revival style remained popular in ecclesiastical and funereal structures until approximately 1930. Gothic churches, tombstones, and mausolea appeared at various levels of sophistication, and by the twentieth century, there was a greater concern for accuracy in the display of Gothic elements. The later Gothic-inspired structures are more accurately labeled Victorian and 20th-Century Gothic, but they are, to some extent, an outgrowth and continued transformation of their Gothic Revival antecedents.