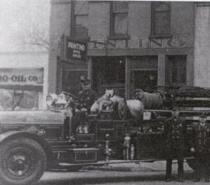 First Dogs
Dogs as mascots have been a Valparaiso Fire Department tradition for years. When the department received its first motorized unit in 1920, its faithful pal was Stubby. There were dogs before that, including one whose name has long been forgotten and whom lived in a stall with a fire horse called Old Charlie.

Joe was an English Bull Terrier, large for his breed, with a pedigree that would have admitted him to any highbrow dog show. He had a progeny that was large and impressive. He was a special character in the show and was allowed to live in the stall of White Molly, the sweet-tempered, broad-backed mare from the circus that loped around the ring with a group of dogs on her back. Molly and Joe were inseparable.

Uncertain Future
One winter night, Molly died in her stall in Terre Haute, and Joe was inconsolable. Joe, now about seven years old, stood guard all night at the mare's grave. From that day, he became a victim of rheumatism and only reluctantly could be persuaded to do his act with the new horse; however, he had growing difficulty jumping onto a horse's back. Age, rheumatism, and maybe indifference made it necessary to put a new star in the act, but Joe didn't seem to mind.

Change in Ownership to the Fire Department
One mid-summer day in 1935, while the Gentry Brothers Show was appearing at the Fairgrounds in Valparaiso, Pros. Delvoe came down the road towards town, asking for a veterinarian. Old Joe was following closely at his heels. Pros. Delvoe was the producer of the bareback riding act and was asking to get Old Joe a free pass to be euthanized. He was too old and too rheumatic to travel with the organization and couldn't do his act anymore. There was a Fireman living at Wolffs Comers who was just about to go on duty. He and Old Joe immediately struck up a friendship, and he learned of Old Joe's possible fate. Joe didn't get his pass to the hereafter; instead, he willingly and almost intuitively turned to the Fireman and was ceremoniously given to the Fire Department by Pros. Delvoe. to be a fire dog.
Car Seat Program
Inspections Bureau
Fire Prevention & Outreach
Out to Alarm Valpo